The mosaics are the second most impressive feature I found at the Villa Grecque Kérylos. The mansion is set right on the Med in Beaulieu~sur~Mer. Appropriately, Kérylos translates to Kingfisher, the english name for marine birds that can be found hunting in the intertidal zone in many parts of the world.
I think these sea creatures were my favorite mosaics. 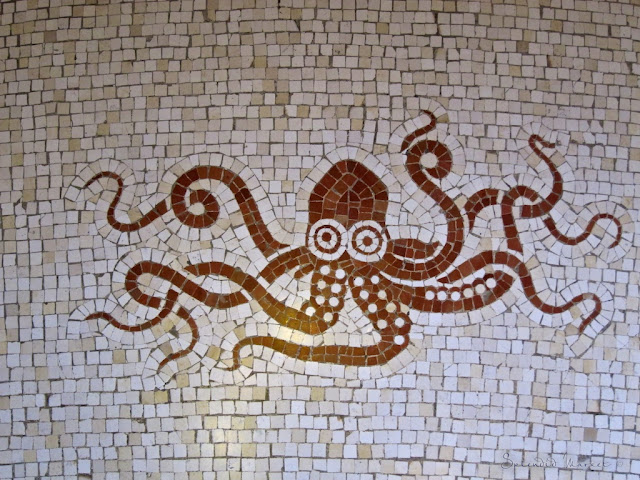 While the Villa is quite grand and filled with amazing details, I actually found it to be a bit strange. It’s was inspired by the Greek mansions on the island of Délos for which the owner, Theodore Reinach and his architect had a passion. 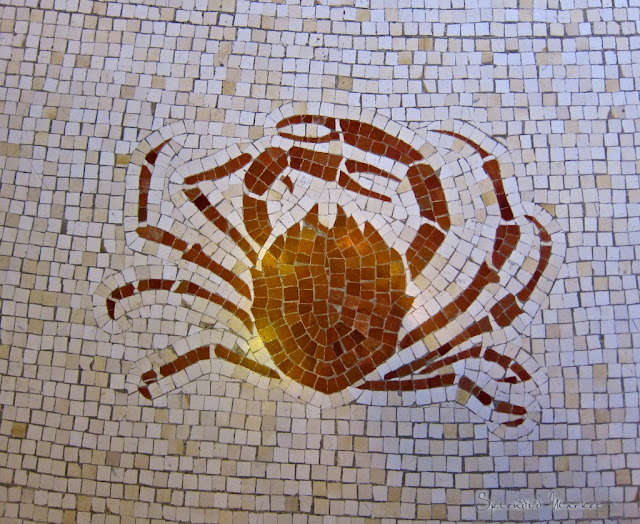 It was under construction from 1902 to 1908, during the Belle Époque period, and is located very near the previously posted about, Euphressi de Rothchilds Villa. Reinach’s wife, Fanny was the cousin of Maurice Euphressi, who was married to Beatrice de Rothchild. Villa Kérylos was reportedly the Euphressi~Rothchilds inspiration for building their own mansion, just down sea a bit. These two mansions are key attractions in this area. One could visit them both in a day if necessary.
What a contrast you’d notice. 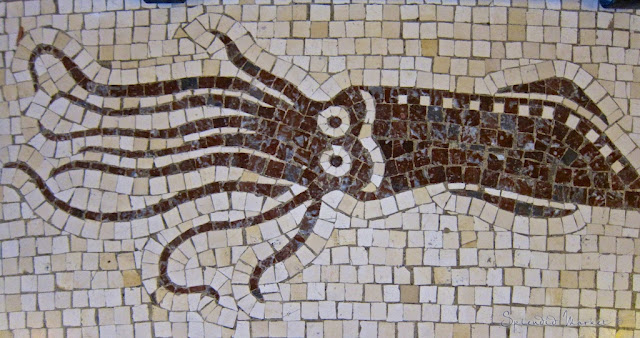 When I visited the Villa Euphressi it was so warm and inviting, the walls and furnishings seemed to whisper stories of the wonderful times they’d seen. The Kérylos, in contrast, felt extremely cold and stark, more like a museum than a previous family home. I’m sure this is mostly due to the extensive stone mosaics and the furnishings, designed with very simple lines and material, as you could have found in Greece during that era. 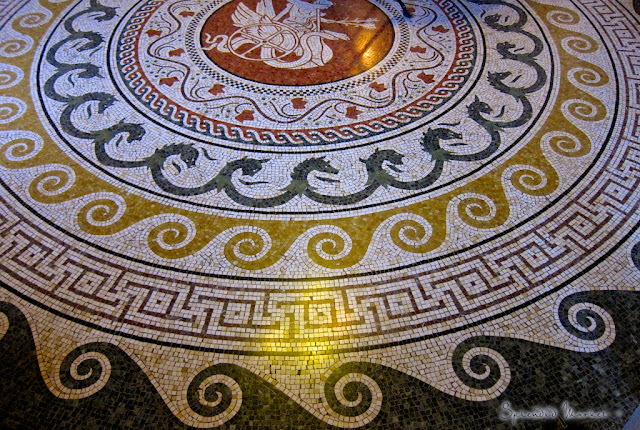 Looking at these incredibly complex mosaics, it is not surprising that it took 6 years to build this significant structure and complete all of the details.
This mosaic was at the entrance and was meant to signify the family welcoming guests {they had 2 daughters}. 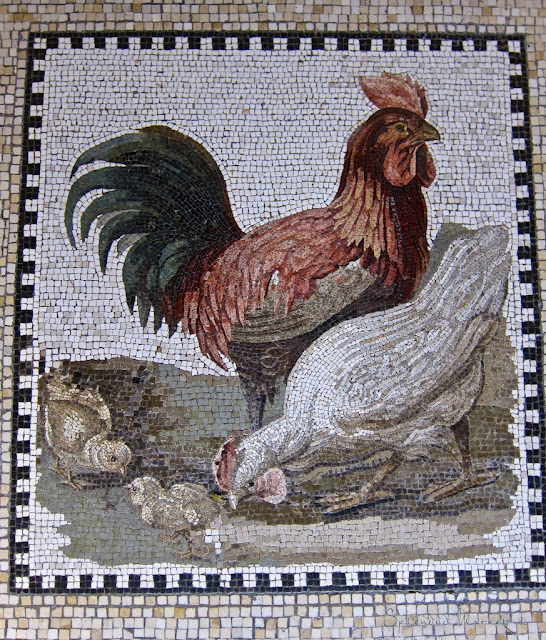 The frescoes on the walls were dramatic, I especially loved the blue and gold display of peacock feathers in Madame Reinach’s room, called Ornites, or the bird room. The room is dedicated to Hera, the goddess of marriage and femininity and the wife of Zeus.
Notice the intricate inlaid woodwork in the door. 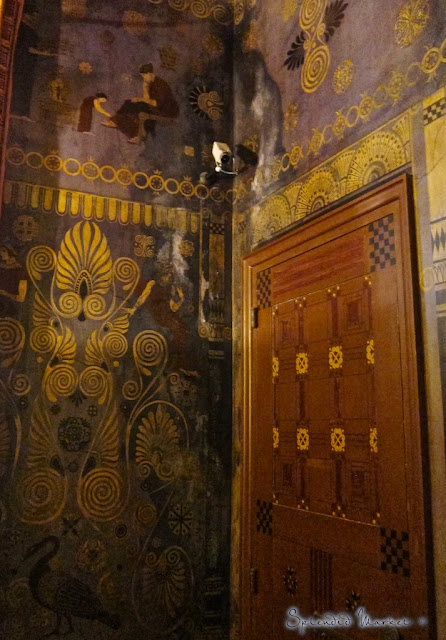 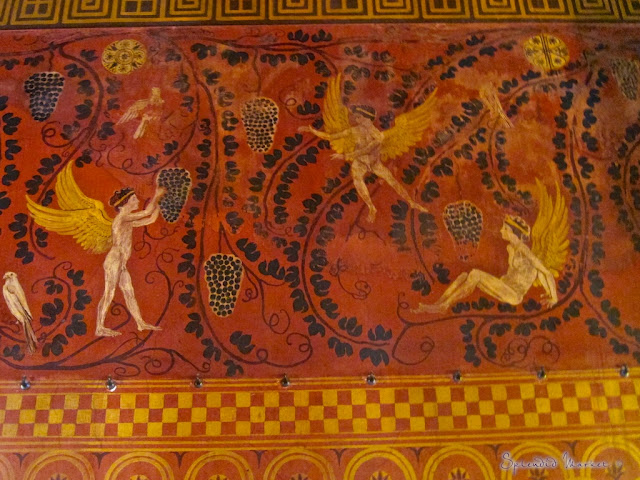 Beautiful as these features at Villa Kérylos were, what I found to be most impressive were the baths.
Look at the incredible veined marble that was carved to make the seats and walls for this tub. Imagine how fabulous this undersea world mosaic scene looked to bathers over the years. 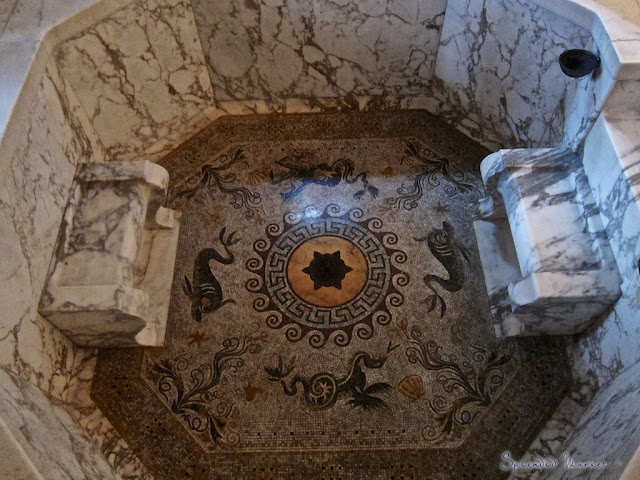 Here is Madame Reinach’s bathtub, a substantial {extreme understatement} beauty made of more than a ton of Carrara marble. I love the carved handles and the massive clawed feet. 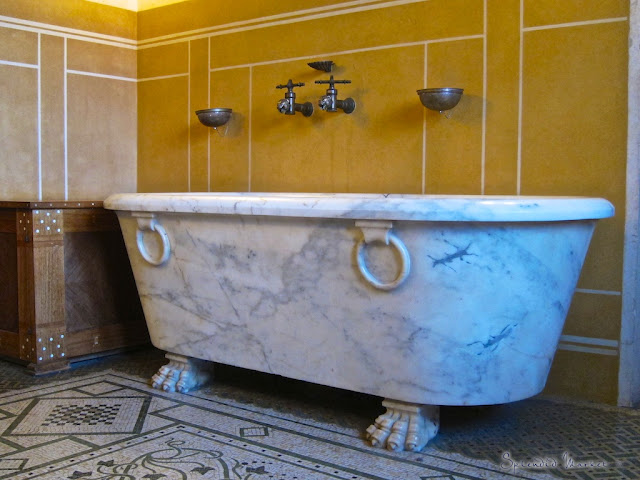 Her bathroom is called Ampelos, which means vines, the mosaic floors elegantly reflect the theme. 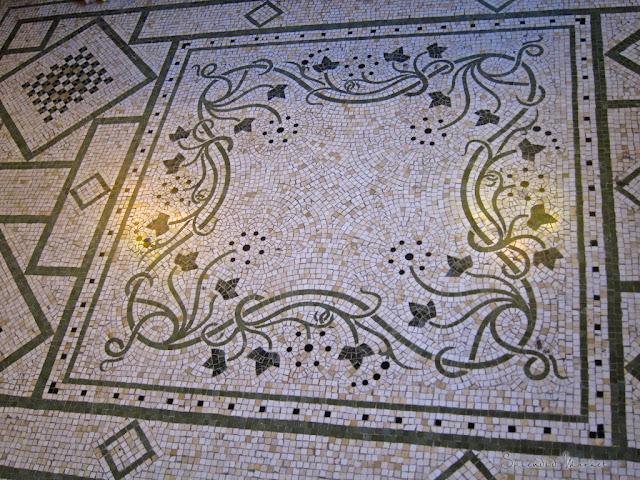 I think my favorite feature was her shower. Showers were very unusual to have in private homes in those days. Above hers, as I understand it, the ceiling could open so that she could bathe in fresh rainwater {or it may be that they captured the rain water in a reservoir so she could opt to bathe in rainwater later, hopefully it was warmer by then}. 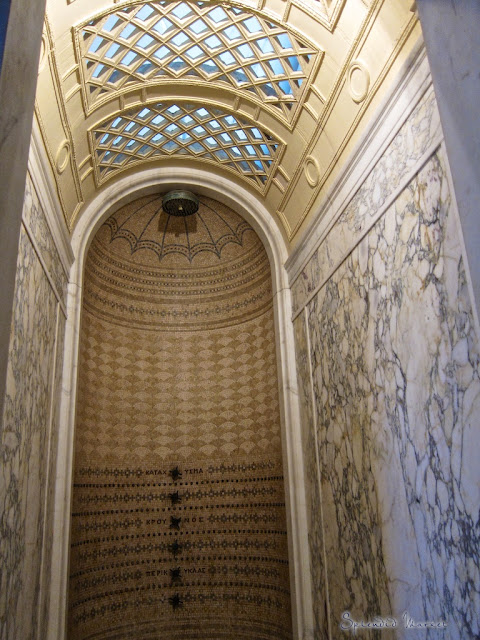 Here’s a close~up on the controls for her shower, poor thing didn’t have a label maker, so they had to identify her options in mosaic stone words. I adore the duo shade fan design that arched up the enclosure, and the wave design at the base.
If she turned the knob
Kataxyema she could shower in a rainfall.
Kpoynoe would bring running water {from the tap}
or
she could opt for Pikykaae if she was in the mood for circular water {I’m not sure what that means, rain and tap water mixed? Anybody??}. 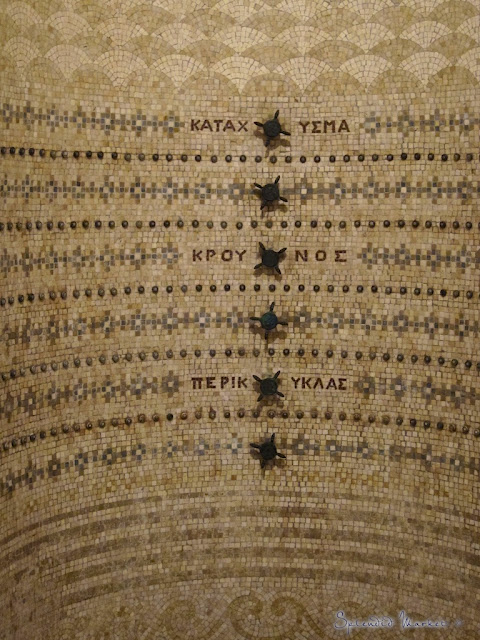 Feeling the blues of these gorgeous icebergs off t

PNW skies over Lake Washington, loving all of the

A quiet 🤫 day at Lumen field today, come on dow

The first of the Oregon Cucumbers forming on Turtl

My happy place, hoping to be there again soon. . .

Be it ever so humble.... loving the wild sky and t