We began our Oregon college tour in Eugene, with an evening game at U of O.

I’m not sure how graduate Phil Knight used to get to school, but these days, he arrives on this jazzy jet. 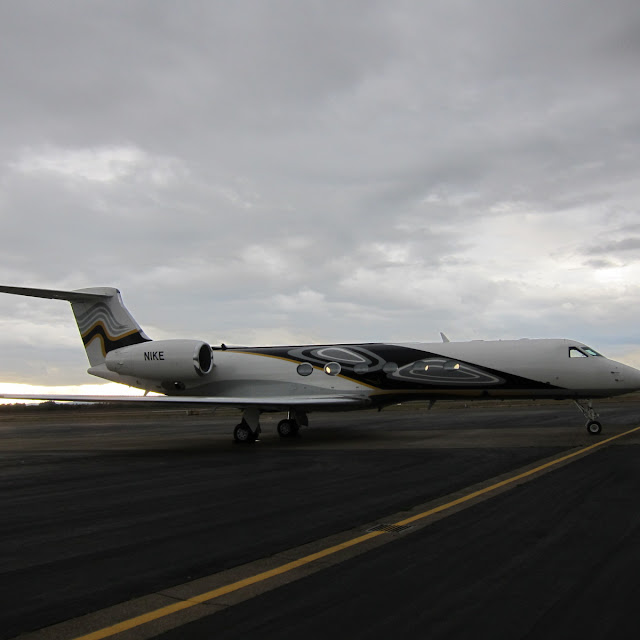 What this image doesn’t show very well is how large the windows are on this plane. No shortage of views and light on this bird.

Phil Knight is a very dedicated alum to the U of O, read on to learn a few interesting details on how Nike and why his loyalty is so strong.

After an exciting and victorious match on Thursday evening, we visited the beautiful new alumni center to take a tour of the campus. The center is a peaceful construction of clean lines and natural elements. Pillars in the center are vertical vitrines, featuring information and keepsakes from accomplished alums.

The display that really caught my eye was the original waffle iron used to create the foundation for nike running shoes. U of O coach Bill Bowerman was an accomplished runner on his own, and actually introduced the theory of jogging to the US. During his 24 years of coaching at the U his runners include Steve Prefontaine and Phil Knight.

According to Wikipedia “Bowerman was obsessed with shaving weight off his athletes’ running shoes. He believed that custom-made shoes would weigh less on the feet of his runners and cut down on blisters, as well as reduce the overall drag on their energy for every ounce he could remove from the shoe. By his estimation, removing one ounce from a shoe, based on a six-foot gait for a runner, would translate in a reduction of 55 pounds of lift over a one-mile span.”

Grip and traction were also a consideration. So, one morning, after enjoying his waffle breakfast, it occurred to him that having a waffle~like base may allow his runner to negotiate the track more quickly. He took the waffle iron out to the garage, ruined the iron, apologized to the wife and continued on. He contacted then business student, Phil Knight, to see if he wanted to partner with him on this business idea and the rest is history.

Bill Bowerman passed away on Christmas Eve, 1999. Phil Knight is alive and well and has been a tremendously generous and ardent fan to the ducks.


According to our tour guide Mr. Knight has promised that the very last shoe created and manufactured by Nike will belong to the UofO….I don’t see that happening for a long time, but the school is happy to have the offer.