I’m not exactly a pizza connoisseur…but I have always been curious about the “famous” pizza temples of New York. While in Brooklyn, we visited one of the doozy’s – Di Fara’s pizza is rated tops in New York (and therefore the world, many say) by Zagat and many other publications.
Compared to the windows we’ve been gazing at in the city, this entrance was quite subdued, but that did not deter the continuous line of diners from pouring into this culinary theatre. 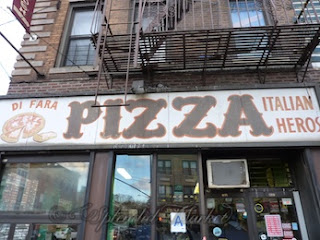 Once we arrived inside and started talking to the enthusiastic crowds, and watching this charming father-son team meticulously make pizzas-with-passion to order, we found ourselves fully entertained by the production.
As the famous father, Domenico DeMarco prepares each of the pies, his son keeps track of the orders on a legal pad, and helps in the preparation. 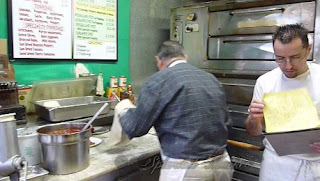 So, what makes the world’s best pizza??
According to Domenico, a cast of the very best ingredients is most important.
For each pie, he exits, stage left, to collect a ball of puffy pizza dough (some say he takes an occasional sip of grappa while he’s “off stage”). The dough is made with flour from Italy. He is obviously very well rehearsed, one can tell by how expertly he kneads and flattens the dough before sliding it onto a floured wooden peel. 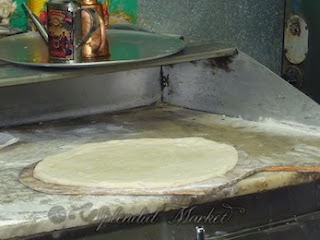 Next, the sauce, made with tomatoes from Salerno, Italy. 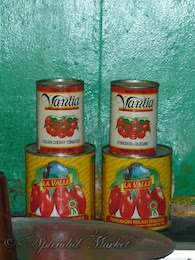 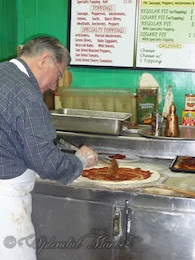 The first layer of cheese is a freshly grated mozzarella 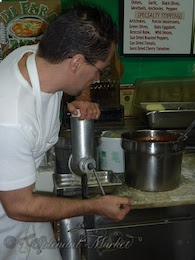 followed with torn chunks of fresh bufala mozzarella shipped in from Domenico’s hometown, just outside of Napoli. 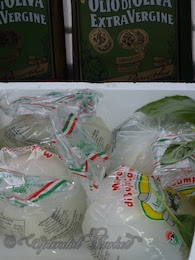 In the next act, the pizza is topped with shaved Gran Padano cheese,
and then, I think, the Pope blesses the pie. 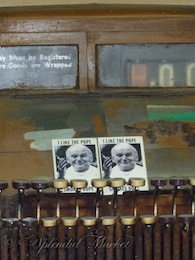 Next, it is drizzled with extra virgin Italian olive oil and slipped into a 750 degree oven for about 10 minutes.

When the pizza is finished cooking the Dom usually pulls it out with his bare hands (they are well conditioned after decades of cooking pizzas).

The audience buzzes during the finale, as he tops the pie with more of the shaved Gran Padano, drizzles on more olive oil and then cuts up a bunch of basil leaves and allows the pieces to flutter down over the pie.

Then a hush comes over the crowd as they wait to hear the initials of the lucky person for whom this pie was produced. 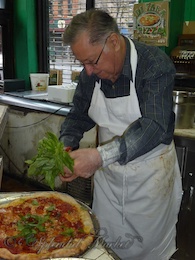 The crust is beautifully charred, chewy and puffy. 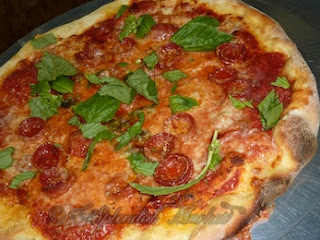 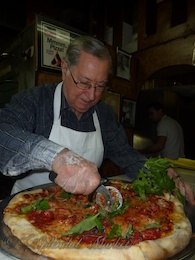 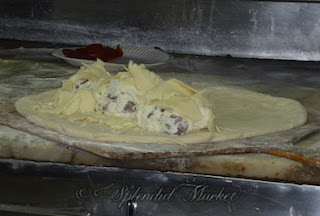 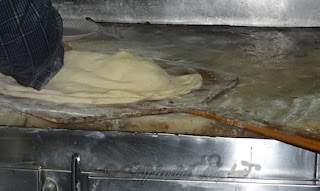 Di Fara’s is a rich cultural experience and the pies are yummy. But, if you do go there, pray be warned, we waited 90 minutes for our order! Maybe place your order, go to the gardens and then come back. Or, just join the loyals and locals and take in the experience. There are occasional opportunities to buy slices of pizza.
I did enjoy the pizza, but I think the biggest treat for me was sharing a few words with the leading man just before leaving his theatre. He has a beautiful, thick Italian accent, sweet, twinkling eyes and a sly smile!
Bravo!

PNW skies over Lake Washington, loving all of the

A quiet 🤫 day at Lumen field today, come on dow

The first of the Oregon Cucumbers forming on Turtl

My happy place, hoping to be there again soon. . .

Be it ever so humble.... loving the wild sky and t

Muget, j’adore. Finally, I found a spot in the g

Found this Fire Beetle in our bathroom this mornin