Wish you were here..

One of the great pastimes during the holidays in New York is strolling the avenues to see all of the festive windows of the department stores. In the opinion of many, the creative team at Bergdorf Goodman creates the the most amazing windows of all, year after year. 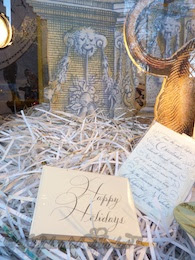 This year their theme is travel oriented and titled “Wish You Were Here”. Roaming gal that I am, I found this theme to be especially appealing. The windows are layered with rich relics, and make one think of both historical and futuristic travel, on a very fantastic level. 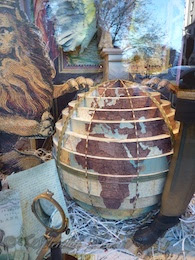 The incredibly talented designers did quite a bit of roaming themselves, to find just the right props to create these windows. The complexly layered scenes, filled with unusual items and luxurious fashions, capture the eye and imaginations of all who pass. 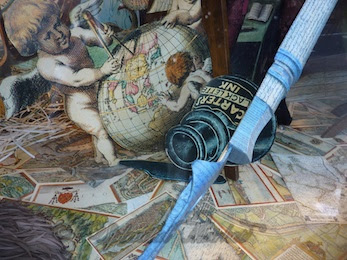 Old world maps had a major presence in many of the displays, they served as wall paper, carpets and shredded shapes.
Maps were cut, shredded and decoupaged to create a menagerie of animals. 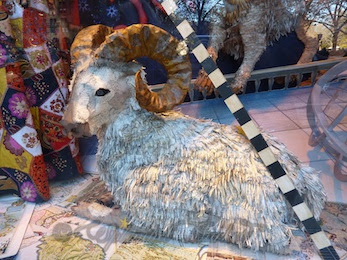 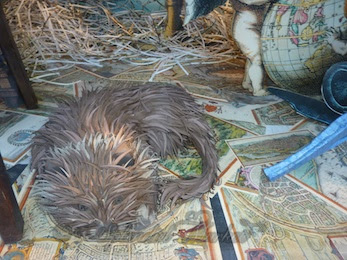 The mannequins were dressed to the tens, in brilliantly combined layers of lovely designer pieces. 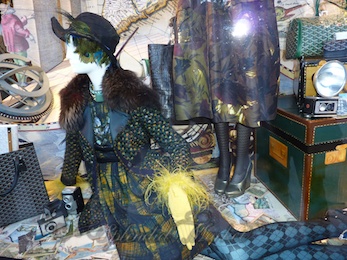 It was a sunny day in New York when we visited and the reflections on the windows made it difficult to take really great shots. But, don’t worry, at the bottom of this post, there is a link to the BG blog post with photos of the windows and a delightful video which will give you a peek into what it took to make these windows so spectacular.
But first, I want to share the elements of my very favorite window, called Daytripping. It is a Sea-to-Space fantasy, in which they reportedly used 2 tons of quartz crystals! 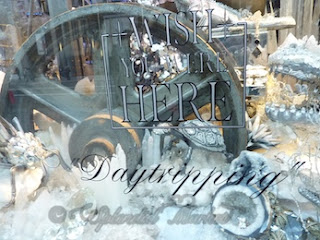 I’m sorry this is hard to see! But, if you look closely, you will see the chicly-dressed explorer mannequin is gazing at the stars through an antique telescope. She is surrounded by antique gears, apparatus and silvery creatures. Can you see the albatross diving over her head? 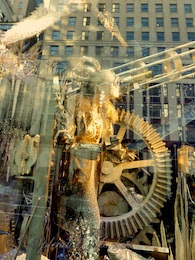 While she is focused on the heavens, it looks as though she has been busy studying the theories of Darwin here on earth. Surrounding her are some of the creatures I studied while exploring the Galapagos Islands (although those that I saw were a little less dazzling), 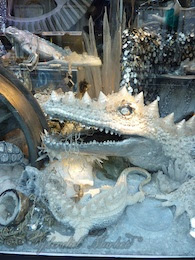 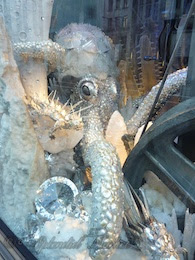 a silver iguana draped in chains and crystal beads, 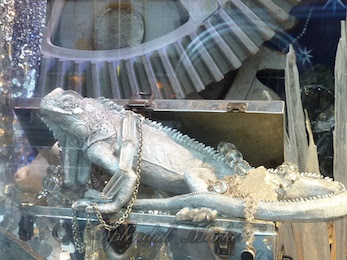 a marine iguana embellished in seashells. 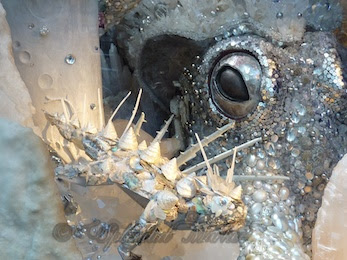 and an over sized praying mantis, which I absolutely adore.
I love an emphasis of silver in the holidays. Once I get started with such a color scheme I take on the attitude “I’ve got a can of spray paint, and I’m not afraid to use it” — anything near me is at risk of being “frosted”. 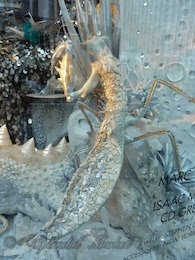 Here is a jeweled turtle, and a Cayman, seemingly crawling through a field of crystals and geodes. 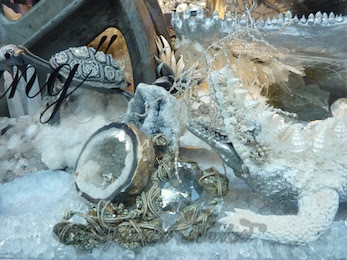 I think you’ll enjoy this delightful video called “Follow Me”.  It will give you a backroom view into the genius of the relentlessly creative team that produced these dreamy windows. Click on the arrow and enjoy the song.
You can see more photos at the BG blog 5th/ 58th by clicking on Bergdorf Goodman (there is a link to the “follow me” video in the blog, but it is HD, and on my computer it kept taking buffering breaks).

To learn more about the creative leaders of this team, click on the name of their new extraordinary book, Windows. 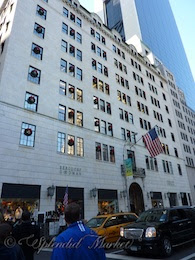 On the upper windows of the building, festive wreaths with red ribbons were hung.

Do you want to see what they did inside?  stay tuned..

How you can tell the paella is ready. Making paell

This Paella is ready to party. Find my master reci