Well, I’ve never been to Spain, but I kind of like Paella…   (part two)

I can’t leave my little wander in the pepper patch without mentioning my all-time favorite dish with peppers, Paella. This is a dish I love to make all year long. But with the warm colors it presents, and the starring role for sweet peppers at their peak, I find I am especially drawn to serving paella in the fall. 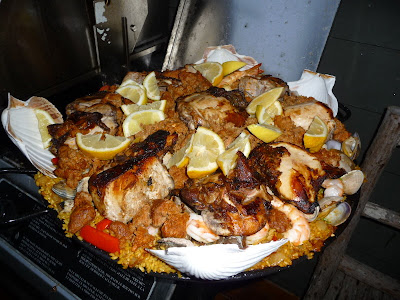 This fabulous, flavorful dish from Spain is a toothsome collage of texture and color.
It is a rice based meal, intoxicatingly infused with the colors and flavors of Saffron, with a myriad of other tasty ingredients.

I have been fixated on paella for quite some time.  Early on, after a couple of introductions, I started on a mission to learn a little more about paella preparation. This was the “crush” stage of our relationship.

Over the years, I have made it for large groups and small, I’ve made it on remote islands on a camp stove, and over a campfire or two. While I love following the very traditional methods for preparing paella, I’ve found it necessary to also come up with a simplified version of this dish, without seafood. I make it on my kitchen stove, for a week night dinner, to satisfy my splendid diners.

The first time I really fell in love with paella was at a market in Provence. A la Patricia Wells, we used to tour Provence based on the schedule of the markets. We’d spend the night in the town where the market was going to be held the next morning; shop the market and buy a picnic lunch; and then drive to the town where the market would be held the next day. Here, we’d tour the town and enjoy dinner (we probably should have been riding bikes to make up for all of the food we couldn’t resist!)

At most every market, we could find the boxy, white van, with a striped awning; beneath which was a gigantic paellera (about 10 feet across) of paella. I’ll never forget the first time I asked for some “to go” (allez?). My iffy French seemed to work, since he served some up for me in a disposable container. Then, I think this was the clincher, I asked for un forchette….he offered me a few mussel shells! How perfect is that?  A beautiful, complex meal of a dish, scented with precious saffron, served up with mussel shells for utensils. I guess I will just always fall for that mix of refined and rustic when it comes to cuisine.

After the experience in the French markets, I ran into a friend who had spent a summer in Spain. She told me about her camping trips with the Spaniards, and how they would always make paella for dinner over the campfire.
After that I became completely obsessed with Paella. I started collecting and trying every recipe for paella that I could find. While some of the ingredients were consistent, most every recipe I read called for something new and unexpected: Valencia beans, almonds, sugar (rabbit is common)…truth is, Paella can be one of those great “clean out the cupboards” dishes. One can modify the ingredients or the quantities to suit their taste (or to use up all of those tomatoes which are on the verge).  But, paella is more than a list of ingredients, it is a process.
Included in my self-administered course on the pleasures of paella, were many visits to a fabulous store called The Spanish Table, they have stores in Seattle, Berkeley, Santa Fe and Mill Valley. They also have a great on line store, to visit, click on The Spanish Table. It was from this store, devoted to all things Spanish, that I received a recipe on how to cook paella over a campfire. This is the place to go to find a paellera (traditional paella pan) of any size, and lots of accessories to go with it — like this perfect propane stand I use for large gatherings. They also have a great stand for cooking over the campfire. 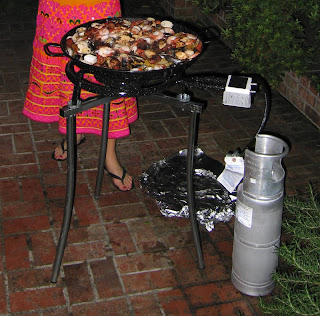 The name Paella applies to the rice dish and also the name of the traditional pan in which it is cooked (a Paellera). Paella pans are available in all sizes – suitable for single portions or for serving 200!

I recommend the enameled version — they are much easier to clean and maintain, and they distribute the heat well.

I saw another way to serve Paella while in France this summer, which reminded me of why I so adore this dish.  It was at the antique market, in the old part of Nice, France (held every Monday in place of the flower market). Aside the dealers stalls, restaurant Le Grand Bleu tempts weary shoppers with these lovely copper pans, outfitted with all of the Paella ingredients, ready to bubble.


Oh la la, who could pass up that langostine? 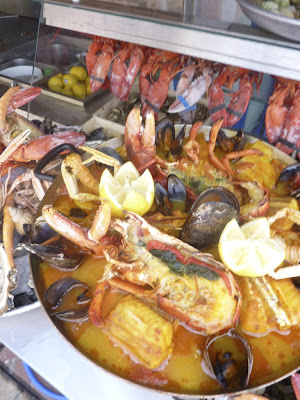 So, this reminded me of a very handy thing about paella — you can adjust the timing for your finished production. The staff at Le Grand Bleu had sauteed the vegetables, heated and lightly toasted the rice and added the seafood and broth to the pan. 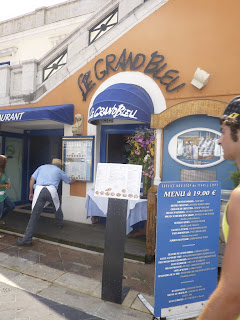 When ordered, the pan is put on the table, and the fire below is set for a gentle rolling boil. Everyone can compare their finds from the market, sip a little rosé, nibble a few olives, and soon, the paella will be ready, hopefully with a lovely golden crust on the underside of that saffron saturated rice! 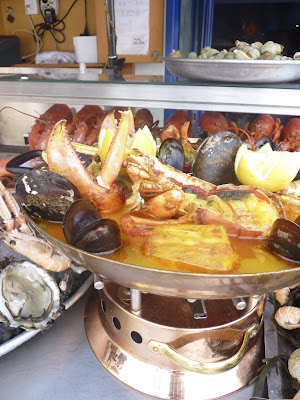 I have a new computer and photo system that I am still trying to master. As soon as possible, I’ll share my best weeknight paella recipe with you.

Until then, you could take a visit to my post on Paella Splendide for my more traditional recipe; and click on Saffron, to learn why I’m just mad about it.


“Well I’ve never been to Spain” was sung, most famously, by Three Dog Night, Elvis Presley and Waylon Jennings.