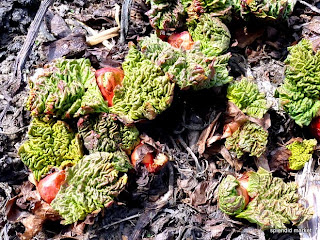 I wanted to share this previous post with my favorite recipe for rhubarb crisp while this crop is at it’s peak. It’s so easy and turns out crunchy, fruity

deliciously — every time, get ready for a ruby romance with this one!

By now, the shrivelled  rhubarb crowns I photographed in Switzerland {above} have surely grown into lovely, slender stalks of ruby rhubarb (Rheum rhabarbarum) .  I’ve always loved rhubarb, especially those ruby red slender stalks, which share their crimson shade so beautifully when cooked. 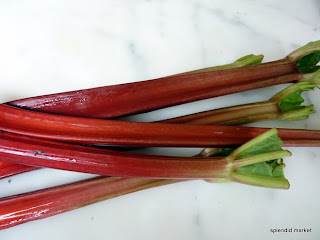 Rhubarb is a big, leafy plant, which grows 3-5 feet wide and tall. Though usually prepared like a fruit, it is actually a vegetable. It is usually grown for its edible stalks, but it makes a beautiful, dramatic, ornamental plant.  The fibrous stalks are a wonderful tart foundation for both sweet and savory dishes. The gigantic leaves contain a substance called oxalic acid crystals, which is quite toxic and can result in poisoning.

Growing up, we had a large rhubarb patch.   I used to love pushing back the gigantic green leaves to find a forest of bright red stalks to harvest.  We would chop up the rhubarb, add a few scoops of sugar and cook it for about five minutes until it was just tender, but still a little chunky.

This time of year, the rosy rhubarb stalks can be found in the markets. A Rhubarb Crisp is a delightfully east way to enjoy this unique, tart, flavorful delicacy.   This crisp recipe will serve you well all summer long. As the season goes on, replace the rhubarb with blueberries, blackberries, peaches, apricots, apples and/or pears.   It takes less than 15 minutes to put together, and it will emerge, bubbling from your oven in 55 minutes. Your home will smell divine. 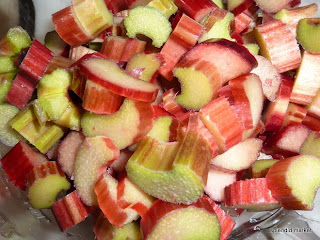 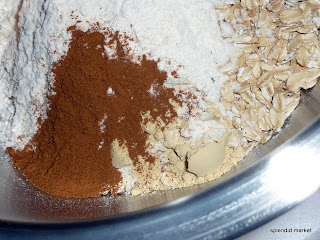 Pour in the butter and blend together until crumbly. 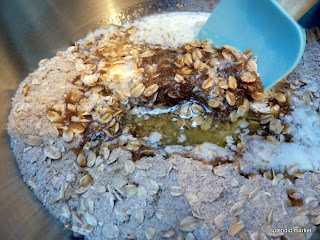 In a small bowl, mix together the egg, flour and vanilla.   Chop up rhubarb (we like to chop the rhubarb in irregular thicknesses, so there is a chunky-smooth texture to the crisp), place in a medium sized mixing bowl.   Pour the egg mixture in and stir until the rhubarb is evenly coated with egg mixture. 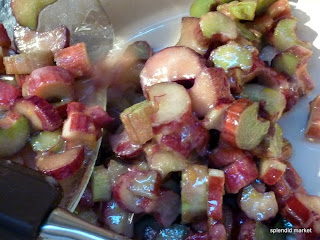 Spoon the rhubarb into a baking dish (we used an oval Le Creuset dish, the inside is 10 inches long). Lightly smooth the rhubarb mixture. 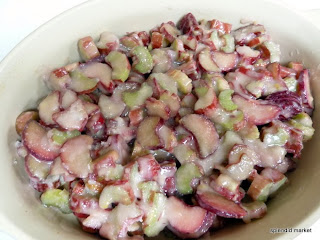 Pour the oatmeal topping over the rhubarb and roughly smooth it (we like to leave some high points and low points, to create plenty of crunchy bits!) 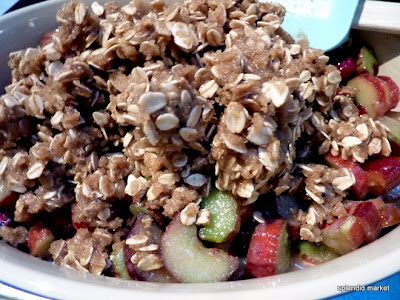 Put it towards the back of the heated oven and turn the timer to 55 minutes (busy bees tip — keep the timer with you! If you are doing something in another part of the house, you may not hear the bell. I’ve taken my timer in the car with me to run a quick errand before!!) 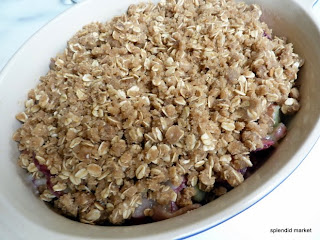 Remove the bubbly goodness from the oven and try to restrain yourself! 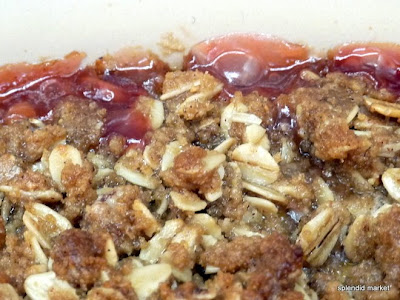 Allow to cool for at least 10 minutes ( I know, it’s hard to wait, but it will be too soft if you don’t).   Serve warm or at room temperature.   Add a scoop of ice cream or whipped cream if you desire. 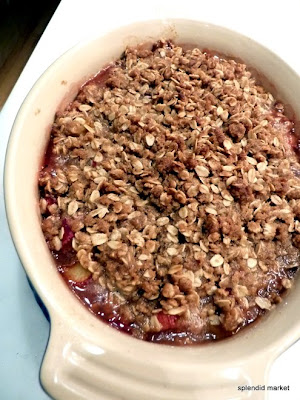 Speaking of rhubarb…I visited a favorite restaurant in Kirkland, Washington (about a 30 minute drive from Seattle) called Cafe Juanita, a few weeks ago.   Cafe Juanita is a spectacular hidden gem of a restaurant focused on Northern Italian cuisine.  The innovative chef-owner, Holly Smith, has been a leader in quality cuisine in this area for years.  She seems to have quite a crush on rhubarb as well.   On our visit I ordered everything on the menu that contained rhubarb!
The culinary splendor began with a Rhubarb Bellini.  Champagne, mixed with a lightly sweetened rhubarb puree. 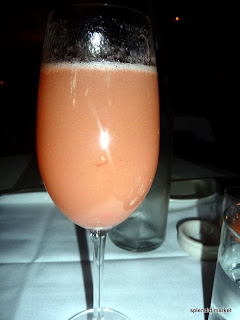 The first course was a salad of local organic arugula topped with slices of rhubarb that had been stewed in a simple syrup, thin slabs of foie gras and a Parmesan crisp. 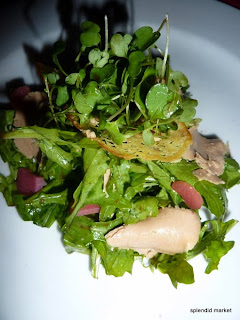 Next, this lovely, succulent beef chop arrived, upon a puddle of savory, amber rhubarb sauce. 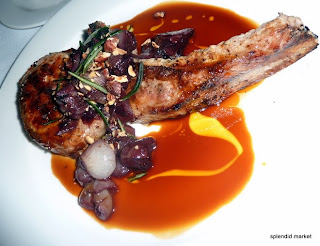 How could we possibly leave without trying the rhubarb sampler for dessert?
Here’s a little sable with a zabaglione dollop, garnished with a beautiful curl of candied rhubarb. 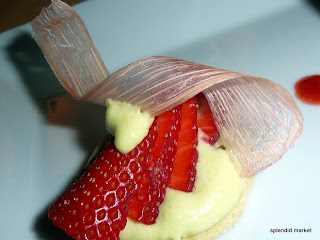 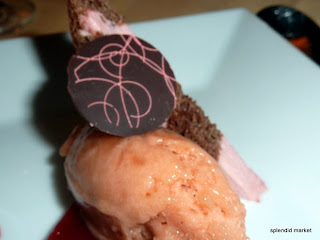 The white chocolate spoon with a golden vine-design provided a tasty platform for this rhubarb puree. 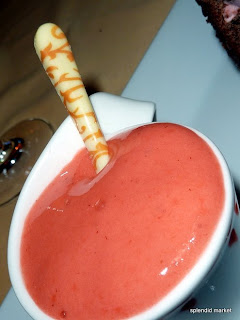 Now I must go running until rhubarb season is over!   Enjoy!

For a printable version of this recipe, click on the Foodista widget below: