Have you ever pursued a recommended restaurant, arrived and then found it to be a little less wonderful than you expected? I was wondering if that would be the case as we took a turn down a very dodgey looking street in London in search of the restaurant Tayyabs. But I was wrong. 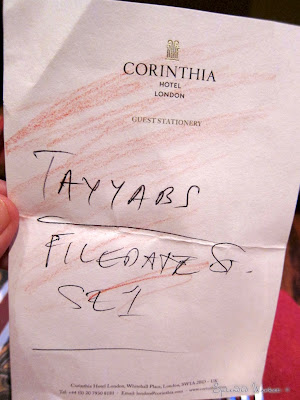 Bustling Brick Lane is filled with outdoor food courts and restaurants with greeters out front barking out offers to entice you “free drinks for the ladies”, “children eat free tonight”. We walked for blocks along this action packed street, looking for Filedate street, but it wasn’t in this busy section. We continued the pursuit and with each turn we took, the streets seemed quieter and more isolated than the one before. We asked someone on the street, who encouraged us to keep going. Then we saw the crowd, and knew we had arrived. 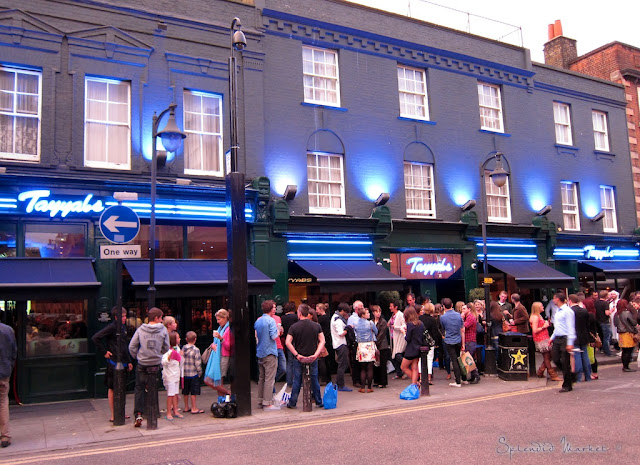 People wait for hours to dine at this Pakastani restaurant {though we later learned that they do take reservations}. Inside a line of seats snakes through the restaurant where a representative from each group waits. Outside it is a fun party scene, people arriving by car or on foot. Many were large parties coming for special occasions. There was an air of excited anticipation in the crowd, as people visited, sipping the beverages they’d brought for dinner {the restaurant doesn’t sell alcohol}. 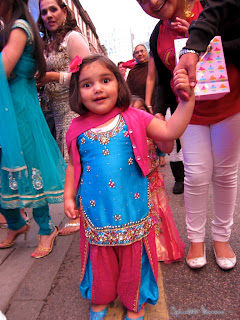 While we were waiting, I couldn’t help but to explore. The busy restaurant is quite large with a couple hundred seats.
I was impressed with the constant flow of trays heading out to the diners, and curious as to what type of kitchen could crank out so much food. 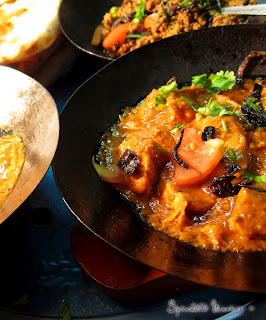 I made my way to the kitchen to take a peak at the actions and to capture a few shots, but everything was moving so quickly. 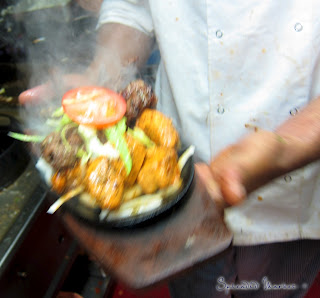 The supervisor yelled something at me, I thought he was trying to tell me to scoot ~ but he motioned me to hop into the heat of the kitchen.

The air was smoky, it was stifling hot, and rich with the fragrant mix of spices and seasonings. This little L shaped room operated like a well~oiled machine. At the very back {the short wall} workers were prepping the food, primarily loading marinated meat onto skewers to be grilled and preparing the naan {worthy of it’s very own post}.

As I moved along the long wall, heavy iron grills over roaring fires were loaded with skewers filled with beef, chicken and lamb. 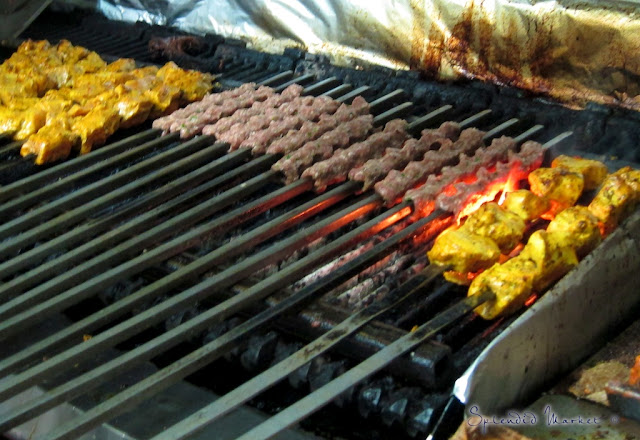 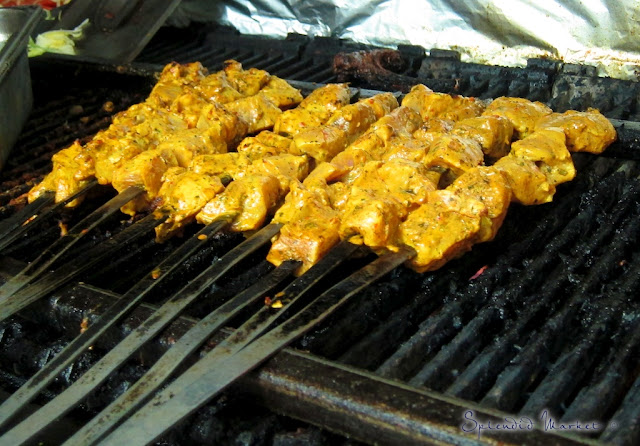 Thickly marinated lamb chops were cooking on another grill. 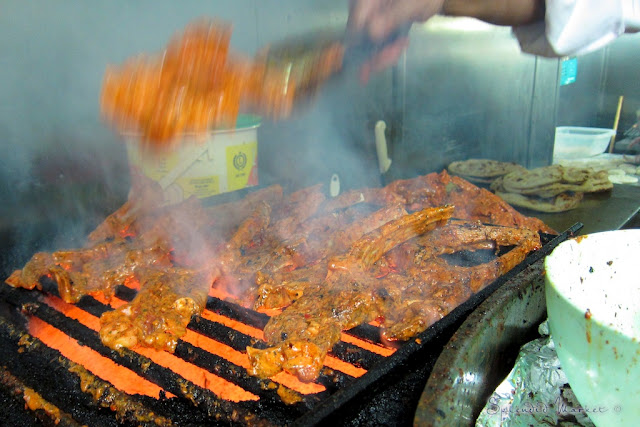 The small space was loud and busy. The workers were cheerful, talking and laughing in their native language, each repeating their single step in the process over and over. 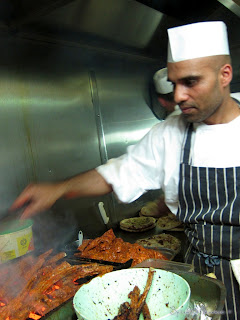 As soon as the meat was cooked it was pulled from the grill, plated and rushed out to the tables. 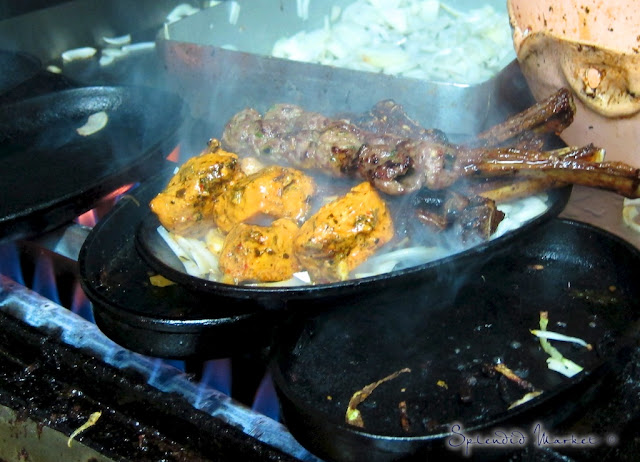 Spicy sauces were on each of the tables. 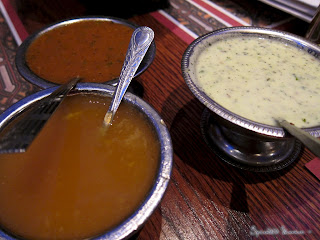 Once we were seated, aside from the mixed grill I’d seen rush by me so many times, I wasn’t familiar with any of the dishes on the menu. 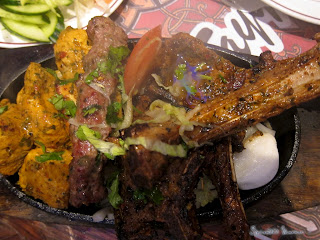 We ordered a variety of dishes, I can’t really tell you exactly what we had, but the mixed grill and everything else were absolutely delicious. All of the food arrived quickly and it was sizzling hot. The meats were tender and the marinades and sauces were unique, perfectly balanced and spiked with marvelous flavors of herbs and spices. 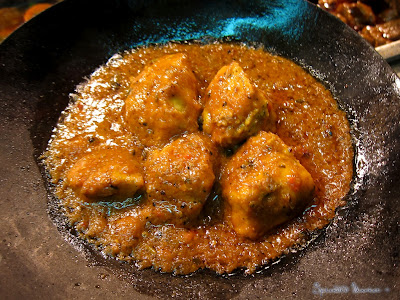 and everything came with the wonderful puffy, garickly naan {more on that in the next post}. 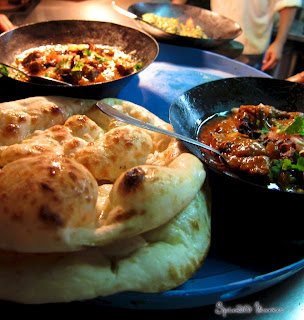