We skidded into Nice just in time to make it to the “welcoming event” at the International School where we tried to focus our foggy, jet lagged heads long enough to sign up for all of the right things and learn all that we could to make the first day of school for my daughter as smooth as possible.
When we finished, I asked my daughter where she wanted to go to lunch. “How about Monaco? I’ve never been to Monaco”. Well, it’s not everyday one can say yes to a request like that, so we hopped into the car and headed to Monaco {I felt like Mario Andretti, as I sailed my manual car along the autoroute at full speed!}
After finding a space in the very nice underground parking garage {clean, well-lit, perfectly painted} we sauntered up to the main square and took an open table at an enticing looking restaurant. As we settled in, it seemed to be so quiet. Except for the occasional outburst of some sort of a song or chant by a rowdy group in red and white, everything seemed too still.
It was as if something had just finished. Then I started noticing clues, the sign on the neighboring restaurant was one; 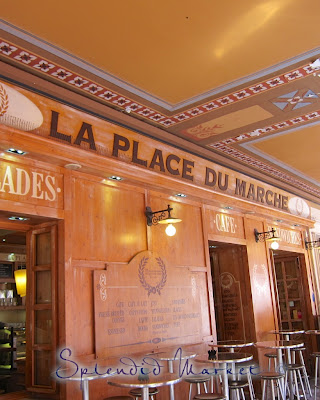 and then there was the man wearing bright yellow, hosing down the very clean looking bricks. Then I noticed the debris at the end of the water force and recognized it at once {I can’t believe I have such an eye for garbage}, no doubt about it, he was cleaning up the remains of a market!
We had just missed the Marche de Monaco. 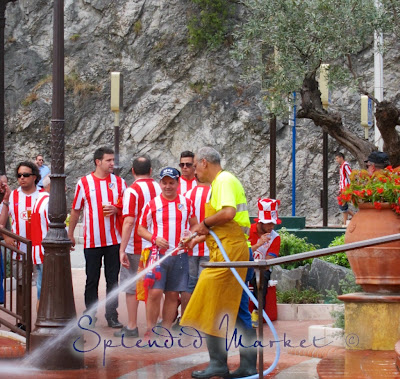 That was fine with me, to tell you the truth, as I wasn’t really in marketing mode. But I must say, I am going to be sure to make my way back there one Friday morning during my stay. The market area is so pristine and clean. There is a medium sized outdoor square, where the bricks are accented with tiles painted with pretty images of produce. They also have an indoor area {which I hope is open year round}.  As I walked through this immaculate hall the vendors were still putting away their delicious looking meats, cheeses, seafood and prepared items, while customers sat at the bars eating, drinking and merrily sharing stories of their market experiences. 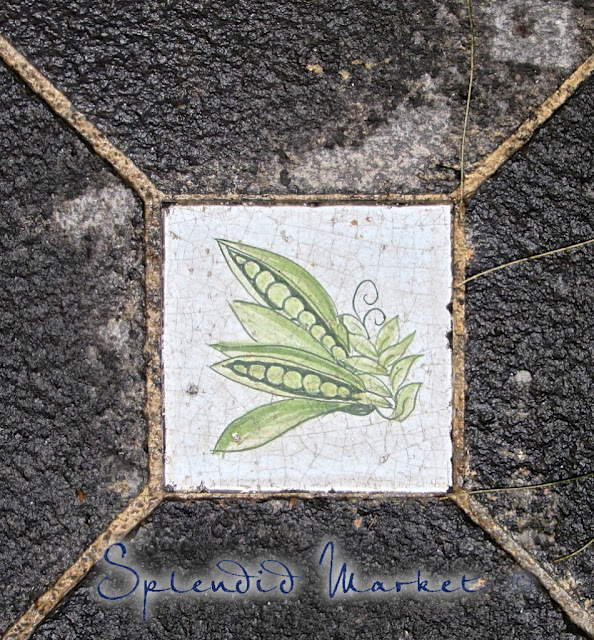 My daughter and I started feeling a little more alive as we tucked into this tasty pizza topped with prosciutto and arugula {drizzled with plenty of olive oil, naturally} 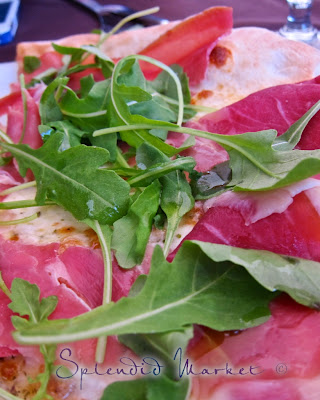 and a grand salad filled with the most flavorful vegetables.
I’ve found that the best remedy for jet lag is to “power through”, and to get out into the sunlight to help your body to adjust to the new time zone as much as possible. However, it’s not always easy to convince your teenage daughter that this is the best course of action, when all she wants to do is to get horizontal asap.
Thankfully during our little after ~lunch wander, we came across Le Jardin Animalier de Monaco and suddenly my animal~lover got her spark back . It was these funny little monkeys that really caught her heart {and her I~phone}. 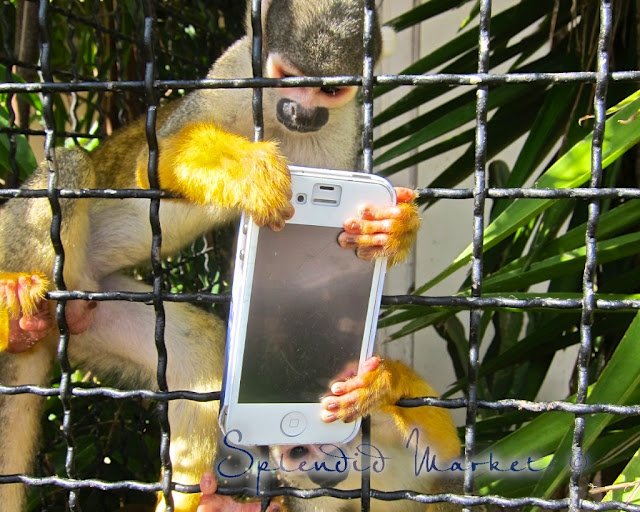 Then, the hearty snorts from this rhino compelled us to continue up the path to see what else could be found in this vertical zoo, built into the south side of Grimaldi rock and overlooking the marina.  Prince Rainier III had this zoo built back in the 1950’s and it reportedly used to house several very exotic cats. 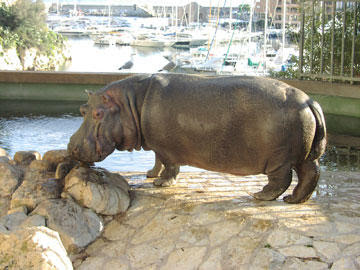 As we continued up the zig zagging path we came across reptiles, crocodiles, birds and some fabulous fowl.
Who knew a turkey could be so gorgeous? 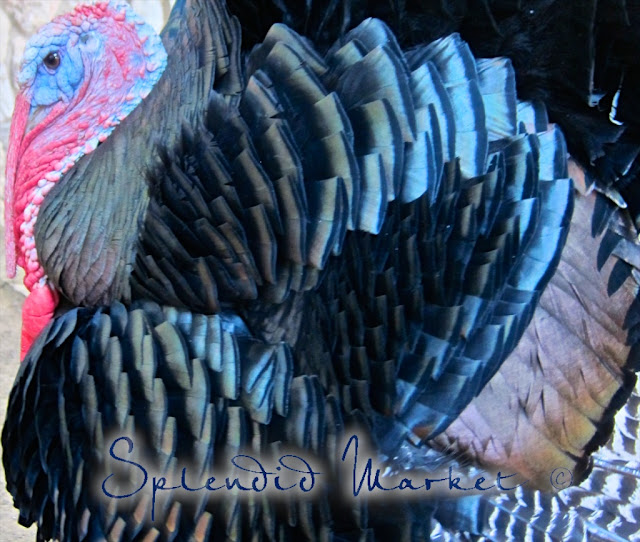 Since they’re not as risk of being eaten, it seems the fortunate French Turkey’s get to reach a grand old age and command a great deal of respect and attention, fearlessly strutting about in full display. 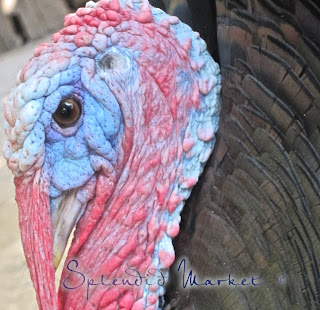 Aren’t the petticoats on this poulet impressive as well? 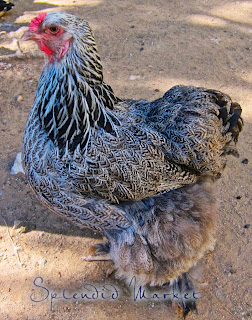 As we came out of the Jardin, we encountered more of the red and white clad folks, a lot more in fact, all singing and chanting the same tune. Using my best {rusty, jet-lagged} french and interviewing skills I learned they were all here for the Super Cup, Athletico Madrid vs. Chelsea. Let me tell you those Madrid fans were fired up and it was still early in the afternoon.  I can only image the scene by the time the game began that evening! 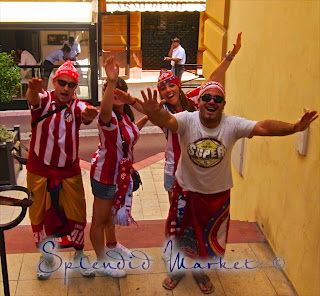 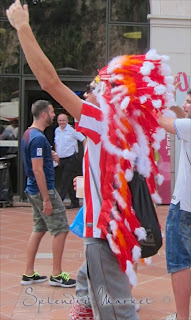 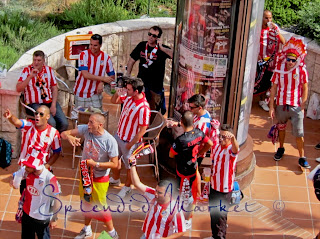 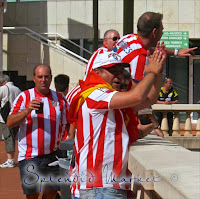 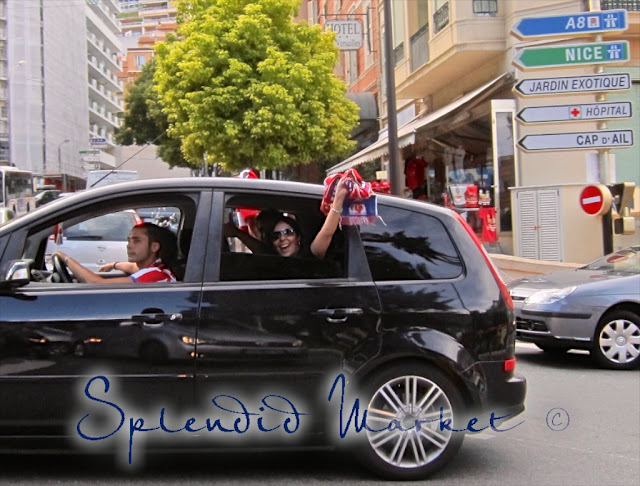 based on team spirit, it didn’t look like Chelsea stood a chance.
The next day, as we were cruising around Nice we came across more of the Madrid fans, if you don’t already know this, Madrid won 4-1.

Still celebrating in Eze, merci for all of the lov