I feel Antonio Gaudi’s style is still very prevalent throughout Barcelona. Prior to his unfortunate death in 1926, he laid a creative foundation for this city. His free spirit clearly has influenced the modern day attitude, fashions, priorities and architecture of Barcelona.
Do you know what really fascinates me about Gaudi? In addition to his genius, I’m very impressed by his courage. While he was dreaming about and then actually figuring out how to construct these flamboyant structures, I can only imagine how many people said “it won’t work” or scoffed at the unusual designs he proposed. When I look at his work I marvel at the beauty, the unique qualities, the details and the complexity; and also, I wonder, would I have had the courage to persevere, to follow through with my vision?
This is a house he designed in what was at one time the growing nouveau riche section of blossoming Barcelona back in the 1800’s. Today, this area is an exciting, fully bloomed and bustling retail area. Can you see the blends of colors on the walls, the shaped roofs and octopus~like balconies? 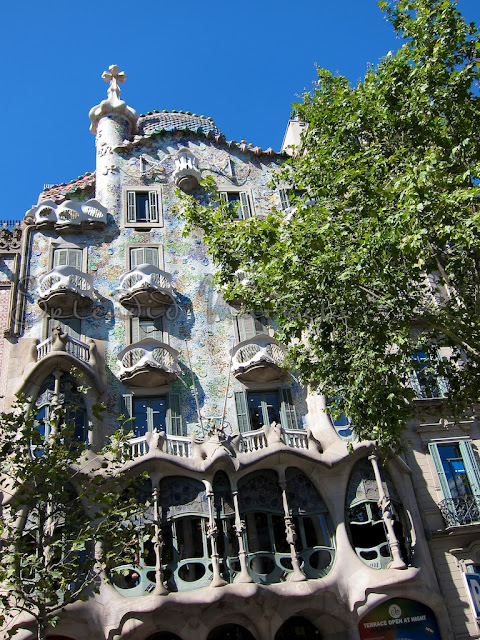 One post couldn’t possibly begin to cover the complexities of the Sagrada Familia, a basilica which has been under construction, off and on, since 1882. I’m going to share some highlights from my tour {and I truly hope to be able to report back when I visit again after the completion of this creation}.
Also, I am sharing some insights on how Gaudi was able to bring his dreams to fruition. There is a museum in the basement of the Sagrada where they were able demonstrated his thought process, to a degree.  Gaudi took up residence in this area during construction and this is where he is buried today.
Gaudi became involved with this project soon after it started, in 1883, he vowed that the church would be for the people and from the people. The church has been built solely on donations, no monies have been received from the government. When this genius died in 1926, the church plans were less that 1/4 complete. The construction process was slow after that, but it continued as finances allowed.
When the Olympics came to Barcelona in 2006, donation vessels were placed at the entrance of the building. Donations from visitors from around the world are funding the current construction boom. The goal is to complete the church in 2026, 100 years after the master’s death. 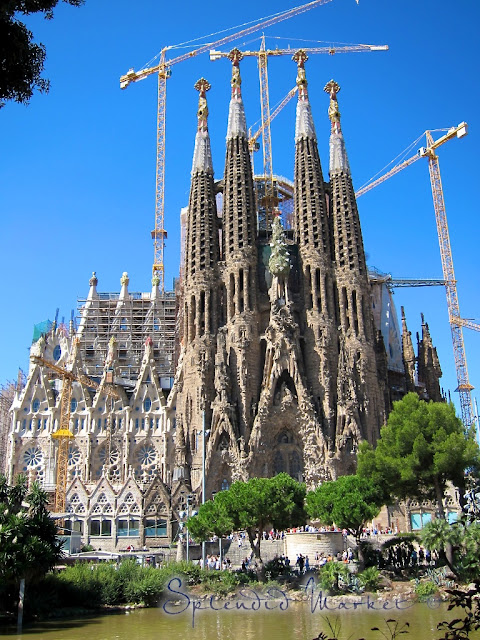 Blended in with the religious symbols which adorned the basilica is a strong presentation of nature. 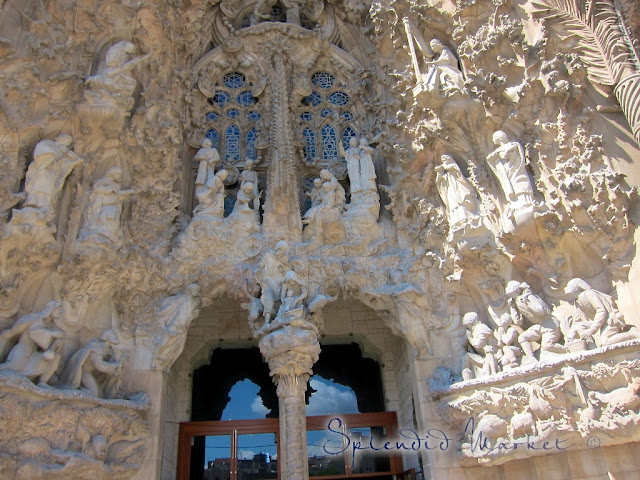 The sacred family at the entrance is encircled with an intricate frame of very natural looking leaves and fronds. 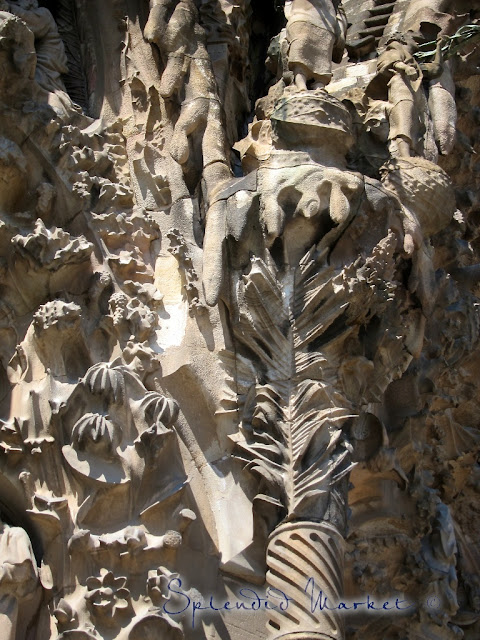 The exterior columns are supported by mighty tortoises. 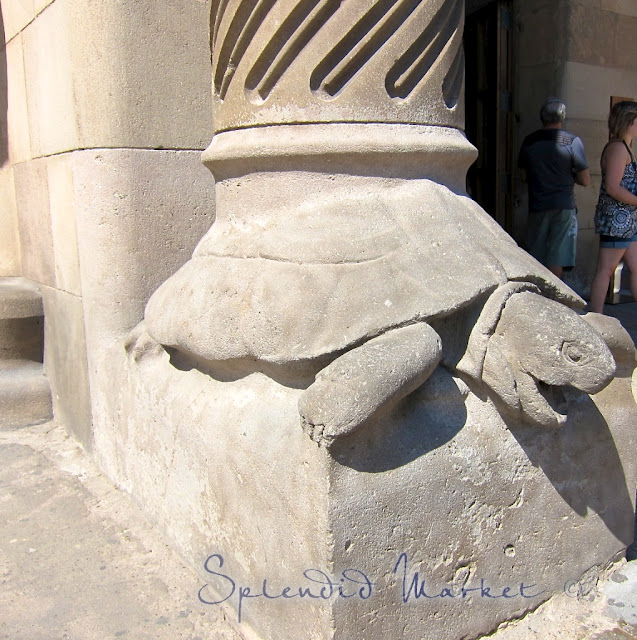 Inside, the flood of white and bits of color were a peaceful contrast to the outside world. The thicket of supports were created to look like trees.

It was “other worldly” to walk through this ethereal forest. 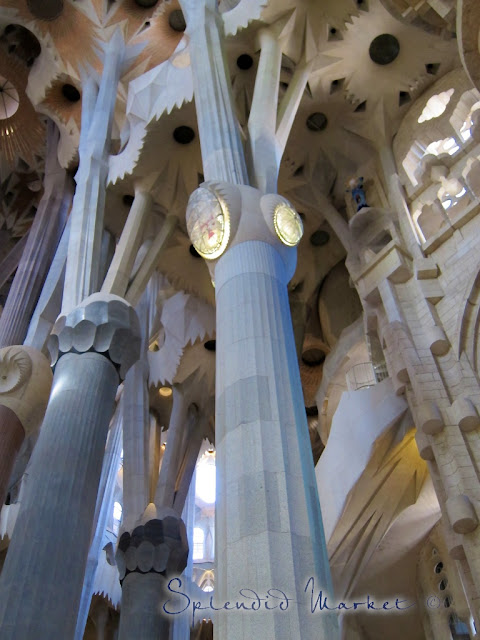 Gaudi’s goal was to make this church for all of the people. In many different areas, religious messages were written in hundreds of languages, in an effort to make all feel welcome. 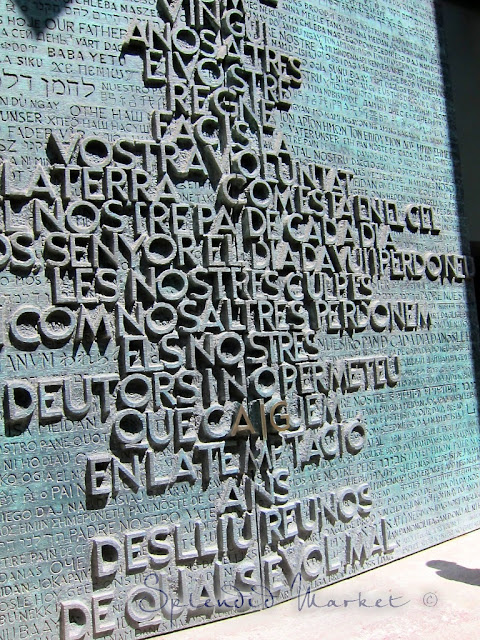 So how, back in 1883 you may wonder {I know I certainly do}, was he able to plan this immense structure?
This is his “computer”. He used small sandbags, and hung them at different lengths to create the spires he was imagining. This helped him to understand how he needed to support the actual spires,

from the ground ~ UP. 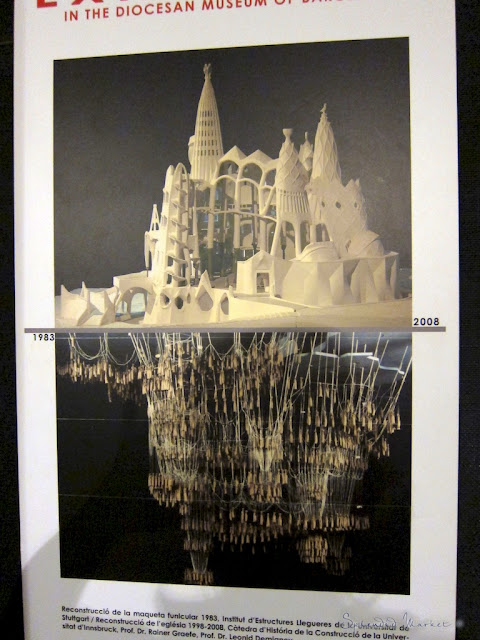 The supports he made in the Parc Guell allowed him to test his theory of creating tilting, twisting supports {similar to trees}. Here he studies the way that trees formed, grew and remained standing steadily. It is through this study of nature that he was able to build the unusual looking supports in both the Parc Guell and the Segrada Familia. 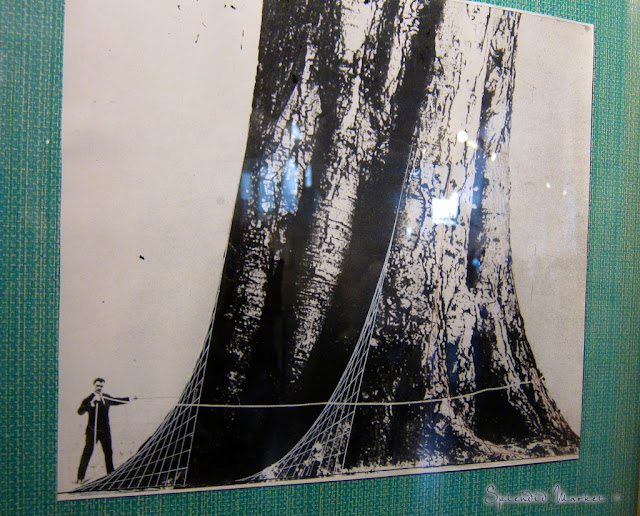 Below, on the right is one of Gaudis drawings; to the left is a modern day, computer generated design of the same structure. Something tells me he, Bill Gates and Steve Jobs, would have a lot to talk about.

Is it just a certain type of mind that can think this broadly and precisely? 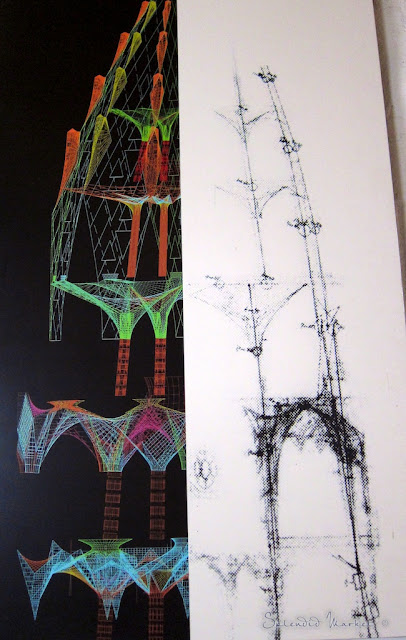 To complete this spiral staircase, he studied cone shaped seashells, and designed it so the edges of the stairs connected to the outer “shell”, 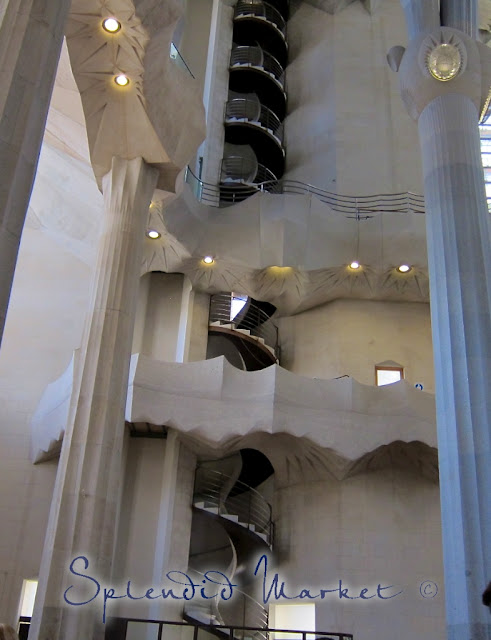 allowing the stairs to freely swirl up this massive structure. 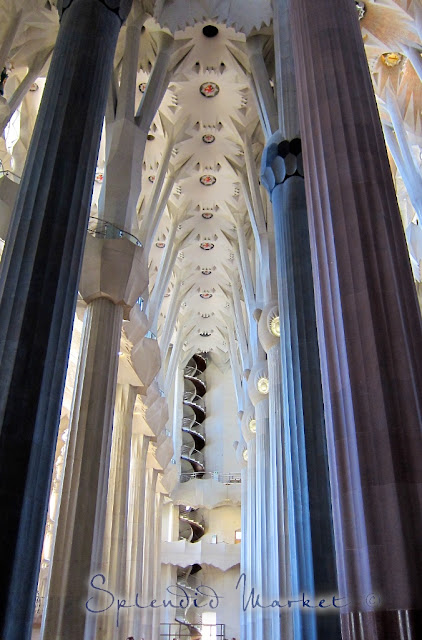 So, would you have the courage? 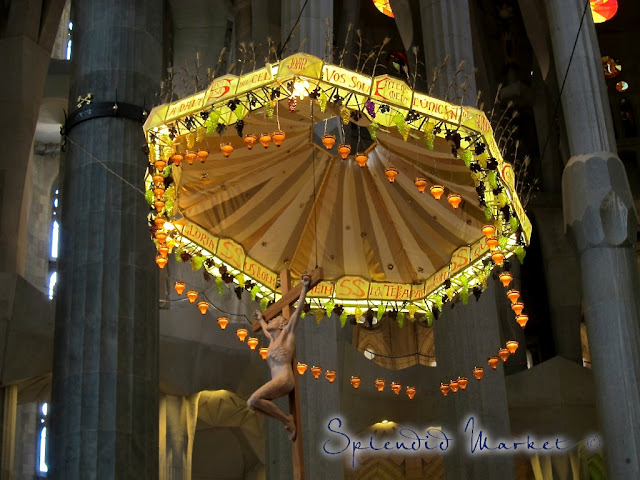 Seeing what Gaudi accomplished, I think we should all believe in ourselves a little bit more and we should always try to make our dreams and visions come true.
Please click on Segrada Familia for some more intricate details into the designs.