..or Salsa Romesco is something we were pleased to acquaint ourselves with while in Spain. It is a thick, complex flavored tomato sauce developed by the fishermen to serve with their seafood. In our dining experiences, we found the sauce in the center of the table while enjoying seafood or, often, the seafood was cooked in the sauce.
When they cooked the seafood in the sauce it was usually in these wonderful little clay dishes, called Cazuelas, which are practically perfect, they are beautiful to look at, oven safe, presentable on the table, and can even be used to cooked over a low flame. I am absolutely adding some of these to my butler’s pantry. To order them from The Spanish Table on line, click on Cazuelas or visit one of their stores in Seattle, Santa Fe, Berkeley or Mill Valley. 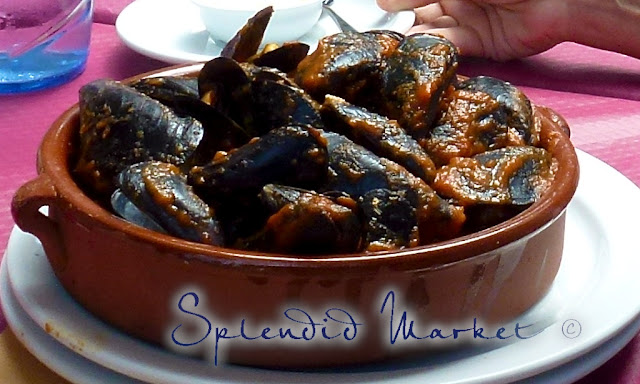 Our most favorite version of the sauce was the one we had at Platja Pals at the restaurant Sa Punta. This simple little restaurant just up the street from one of the largest, and most crowded of the beaches we visited in Costa Brava featured some of the best food we tasted in Spain.

When we finished all of the mussels, we had to order bread because we couldn’t stand the thought of letting this luscious sauce go to waste. 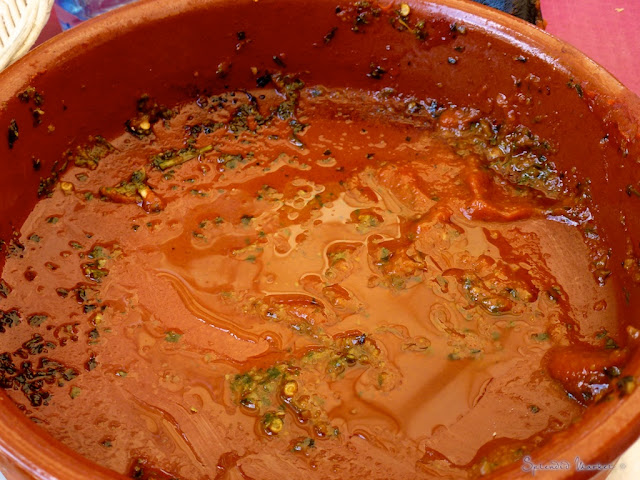 As with any sauce with ancient, rustic origins, there are many different versions of the Salsa Romesco, and it is a sauce that invites one to be creative. We did ask for the recipe at Sa Punta, but the managers terms were more than a little presumptuous.
All is not lost, however. On our way to El Far we planned on stopping for lunch and asked for a recommendation to a casual little restaurant with good Catalan fare {we were all in swimsuits and cover ups}. We wanted someplace that would be appropriate for our van load of kids.
Well, the Michelin starred restaurant El Tinars certainly offered delicious Catalan fare, but it was a little more formal than we expected. We received more than a couple of “looks” as we traipsed in with our goat rodeo for lunch!

But, all is well that ends well. The origins of this restaurant connect back to the the early 50’s, before the Costa Brava became a destination for visitors. The current generation has put a gently modern twist on the presentation. We had a lovely lunch and they kindly shared with me their recipe for Salsa Romesco.

Reading their recipe, I realize that the rich complex flavor of the sauce is a result of the cooking the ingredients in different ways before blending them together, offering a luscious, blended taste of roasted tomatoes and garlic, smoky peppers and country bread pan toasted with olive oil.

As I mentioned earlier, this sauce is on one that is made from many different recipes. When you make it you should feel free to modify to suit your tastes. In my research, I found that most of the recipes for Salsa Romesco included ground hazelnuts or almonds to thicken the sauce and give it a richer flavor. This recipe did not. All of “ingredientes” and “elaboracions” were written in Catalan and the quantities were in metric, so I have done some creative converting, and a little bit of modifying on this recipe.
Ingredientes

6 cloves of garlic, finely chopped
1~1/2 pounds of fresh, ripe tomatoes
1/4 cup olive oil {plus more for cooking}
1/8 cup sherry vinegar
2 fresh chilies, roasted {they called for the local guindilla and carne de flora chilies, I used one anaheim and one jalapeno}
2 crustless slices of white country bread
sea salt
Elaboracion
Cut the tomatoes in 1/2 and put them in a roasting pan with the garlic and some olive oil, sprinkle with 1/2 teaspoon of sea salt. Roast in the oven at 350 degrees for about 20 minutes, until the tomatoes start to become soft and the skins begin to wrinkle and split. Once cooked and cooled sufficiently, peel the tomatoes and garlic. 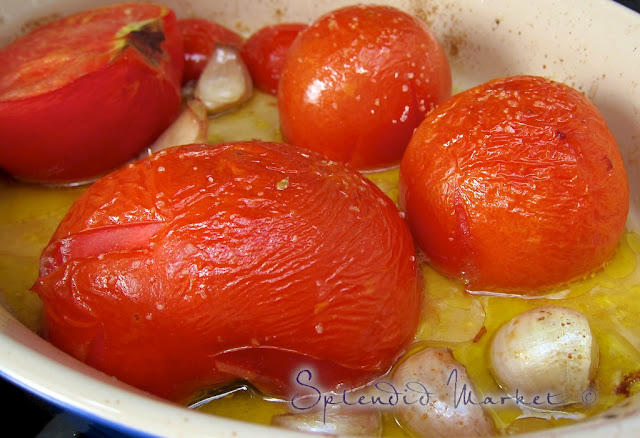 Roast the peppers over a flame until well blistered. Allow the hot peppers to sit in a paper bag for about 1/2 hour to steam and soften. 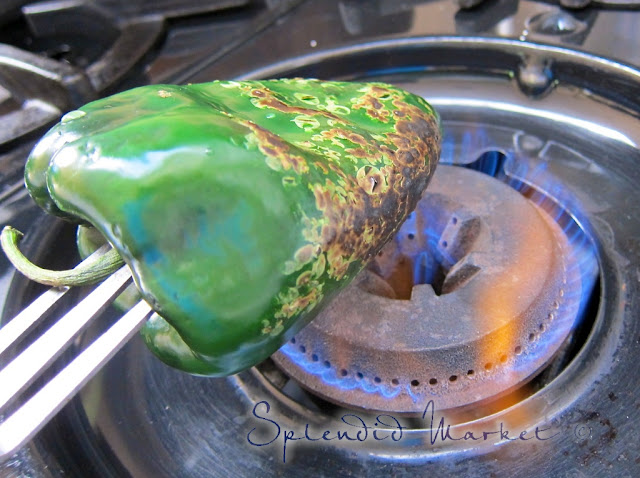 When softened, seed and core the peppers and scrape off any excess burned skin with a fork or dinner knife. 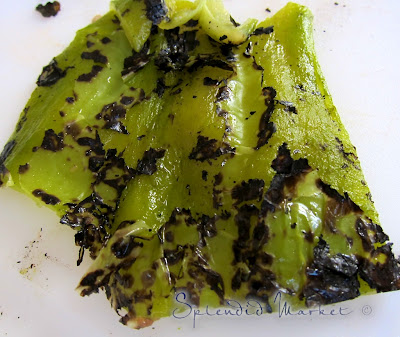 Pan toast the bread in olive oil.
Combine the peeled, roasted tomatoes and garlic, bread and chilies in the bowl of a food processor and process until thick and smooth. Add the 1/4 cup olive oil and the sherry vinegar and take it for another quick spin.
Add more oil, vinegar or salt to taste.
This will keep in your refrigerator for about a week {I’ve actually found it best to make this the day before you need it and then do a final seasoning after all of the flavors have a chance to meld for 12 hours or more}.
I love having this sauce on hand in the refrigerator, it really comes in handy. When some friends invited us to see their new {yet to be furnished home} I told them we’d bring a picnic dinner.
I put slices of halibut in a baking dish, sprinkled them with salt and pepper and then topped them with the sauce. I also added some sliced Spanish olives, capers, a drizzle of olive oil and the juice of one lemon. After baking the dish for 25 minutes at 350 degrees, the halibut was tender and moist within that flavorful sauce. 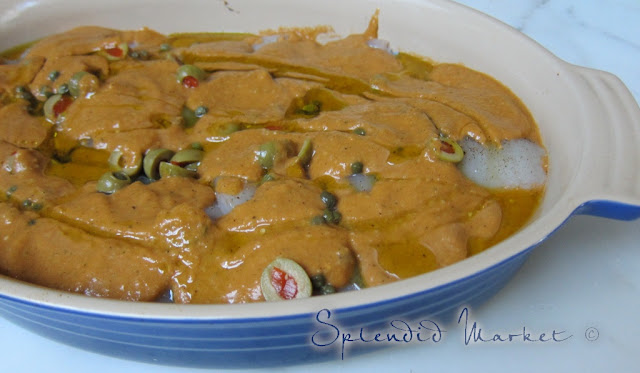 It is also a nice liquid in which to poach eggs for brunch. Serve them up with a side of fried corn tortillas and dabble of coriander chutney or salsa verde, plus a splash more of olive oil. 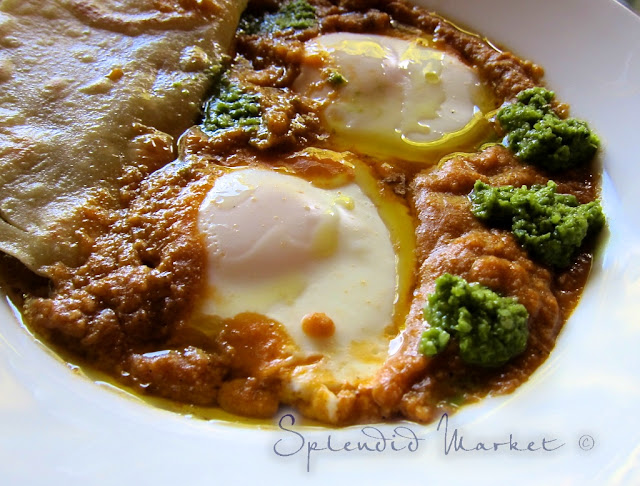